Up to 65% Savings on Hundreds of Games

Sign up with iWin.com to save up to 65% on hundreds of games. Click link to get started.

Sign up for Club iWin for benefits including a 10% instant reward for every purchase. Click link for details. 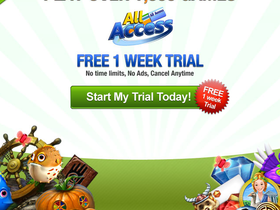 If you're a gamer of any level, visit iWin.com to satisfy your cravings and hone your skills. iWin.com is one of the leading casual game portals, offering over 90 games available through PCs, Macs, mobile devices, handheld devices, consoles, and retail locations. As the creator of the Mah Jong Quest and Jewel Quest franchises, iWin specializes in producing quality, engaging games and generating a welcoming gaming community. With an extensive variety, ranging from action to puzzle to board/card games, iWin has something for every gamer. Even better, iWin offers a great selection of free games, so anyone can begin with no commitment. Start gaming at iWin today, but before you do, find the latest iWin coupon codes, iWin promotions, and iWin discounts here at Coupon-Gurus.com.

Brush up on your gaming skills with 1,000 free practice credits at GameDuell.com. Click link and start playing today.

Now at GameHouse play Bejeweled 3 for free with FunPass! Click link for more.

Try FunPass at Gamehouse.com and get unlimited free play for over 1000 games! Click link for details.

Play for free at GameDuell.com by redeeming 2,000 play credits. Just enter this coupon code at signup. Click link to begin.

Free Game Every Month with Membership

Play a free game every month with your FunTicket membership from GameHouse.com. Click link and play.

Get over 45% off the Quick Start Super Bundle only from Ellusionist.com. Click link to activate.

Spend $75 or more at Ellusionist.com and you'll be eligible to receive free gifts including tattoos, cards, apparel, and more. Click link to...

Visit BPong.com and find clearance items at up to 30%. Click link to start shopping.